Respiratory diseases can be considered as the second most common cause of loss of performance in sport horses and racehorses after musculoskeletal problems. The overall prevalence of respiratory diseases is most probably underestimated due to the fact that some chronic forms of diseases may develop sub clinically, although they still impede performance.

Intensive training, repeated transports and mingling during competitions may also promote the development and transmission of infectious diseases. Whatever the type of sport, most lower airway diseases cause a significant decrease in athletic parameters and delayed cardio-respiratory recovery. The main lower respiratory diseases involved in poor performance reported are inflammatory airway disease (IAD), recurrent airway obstruction (RAO), exercise induced pulmonary haemorrhage (EIPH) and viral or bacterial infections. Several factors inevitably promote the occurrence of inflammatory diseases, such as age (higher prevalence in older individuals), pollution and other environmental conditions. Horses are often housed indoors in buildings were ventilation within the boxes is limited, indoor storage of hay and straw can be encountered and doors and windows are often closed during the cold months. This type of management promotes chronic respiratory inflammation.

Intensive training, repeated transports and mingling during competitions may also promote the development and transmission of infectious diseases.

Moreover, competition itself is also a key factor in the prevalence of lower airway diseases in horses. Competition may trigger metabolic and hormonal alterations, which disturb immunity. Depression of the immune system and the occurrence of repeated inflammatory and oxidative processes during training and competitions seem to create favorable conditions to the outbreak of infectious respiratory diseases. These respiratory problems are often subclinical but have an impact on performance and may impede the pursuit of their physical preparation as well as post-race short and long-term recovery.

Exercise-induced pulmonary hemorrhage (EIPH) is a unique respiratory condition that results in the shedding of blood in the lungs and airways after a sufficient strenuous exercise. Pulmonary hemorrhages have been shown to be associated with pulmonary inflammation and fibrosis, gas exchange disturbances during exercise and subsequent poor performance. EIPH can also affect negatively the duration of the career of sport horses and race horses.

In practice, the diagnosis is generally made by observation of: 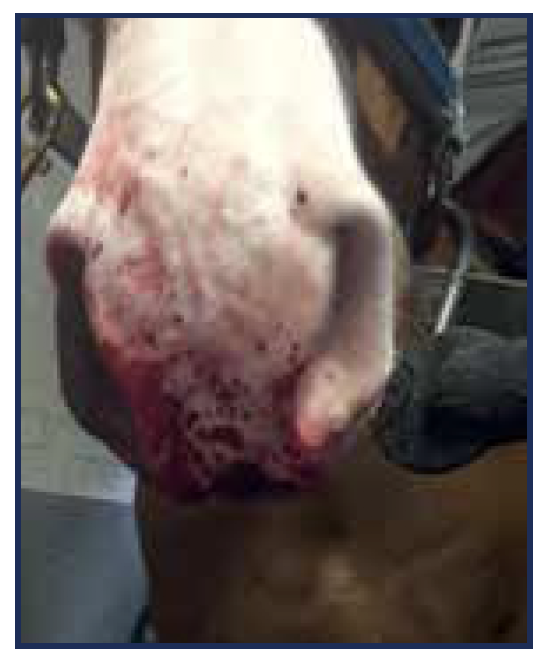 > POST-EFFORT EPISTAXIS (bleeding from the nose)

> BLOOD WITHIN TRACHEA AND LOWER AIRWAYS

However, in most cases, the blood remains within the lungs and diagnosis can only be made through sampling of the lower airways.

RACE HORSES: Prevalence as high as 95% has been reported.

EVENTING, POLO, AND EVEN HIGH-LEVEL SHOW-JUMPERS: In all disciplines including intense or fast bouts of exercise, horses have been diagnosed with EIPH. Recent study revealed that the incidence of EIPH in show-jumpers – participating at 4 and 5 star competitions – can go up to 50%.

There is a need for an effective, non-doping prophylactic treatment to prevent the occurrence of EIPH in competitive horses.

Based on the current scientific evidence, EIPH should be considered a disease, as it is progressive and can significantly reduce lung capacity.

> Furosemide is currently the only effective treatment for the management of horses with EIPH. However, because of its ergogenic effects, furosemide is banned from use in competitions by racing jurisdictions in Europe, Asia and Australia as well as by the FEI.

> AIM OF THE STUDY

Determine the effect of a daily oral supplementation of Cavalor Bronchix Pulmo over the period of one month on the incidence and severity of EIPH in active racehorses.

Sixteen Thoroughbred racehorses in active training and racing were involved in the trial.

All horses were supplemented every day for 25 days.

INITIAL EXAMINATION AFTER RETURNING FROM A TRAINING SESSION AT THE GALLOPS, PRIOR TO SUPPLEMENTATION

Horses were scoped and scored for:

Were considered as having EIPH:

TW and BAL, also sampled for WBC, RBC and cytology at T2.

> 15/16 THOROUGHBRED RACEHORSES WERE DIAGNOSED WITH EIPH

EFFECT OF SUPPLEMENTATION ON RESPIRATORY HEALTH 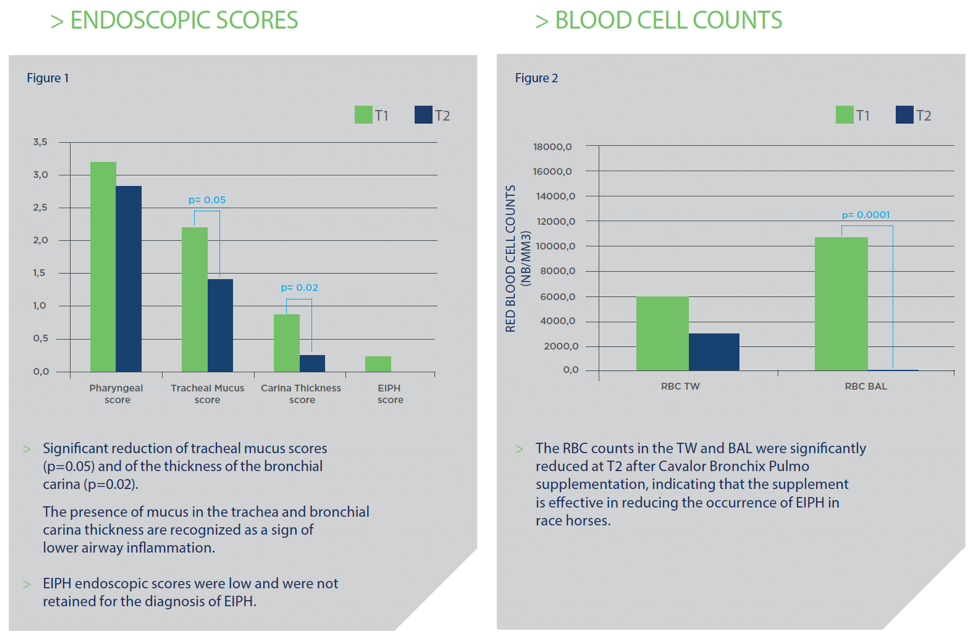 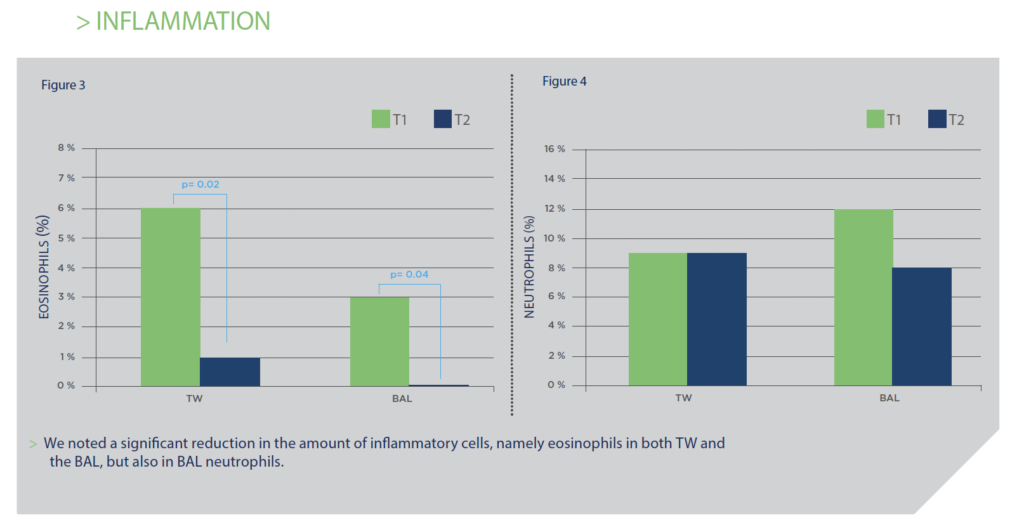 This study demonstrated that the use of daily Cavalor Bronchix Pulmo oral supplementation during a 25 day period significantly reduces the incidence and severity of EIPH in Thoroughbred racehorses during a period of intensive training. Non of the horses studied bled at T2. The results also show that Cavalor Bronchix Pulmo has a mild anti-inflammatory effect and reduces signs of inflammation in the lower airways.

Cavalor Bronchix Pulmo is an oral supplement that can be given to horses as a preventative measure to avoid the occurrence of EIPH. 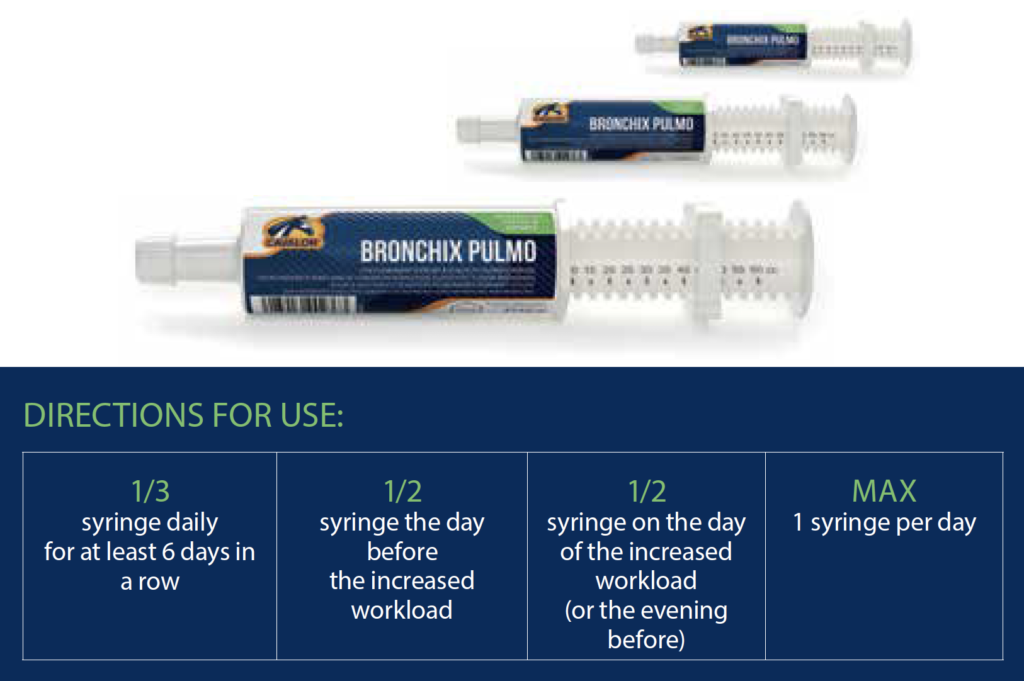