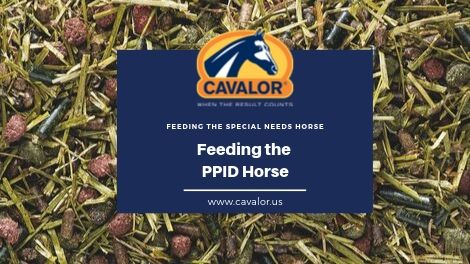 As mentioned in our last article, when you have a horse with metabolic problems it is important to not just treat the obvious symptoms but also think about other underlying issues that might be occurring. And to do that, it’s important to start with a proper diagnosis. The only solution for metabolic diseases is to remove the cause so that metabolism can normalize on all the different levels. So to that end, let’s talk about some of the similarities and differences between PPID (Cushings) and Equine Metabolic Syndrome (EMS).

EMS is characterized by three main symptoms: obesity (general and regional), insulin dysregulation (ID) and a history or predisposition to develop laminitis. The cause of EMS is also variable but typically it is a combination of both genetic predisposition (for example, naturally easy keepers are more prone to get EMS), overfeeding, lack of exercise and sometimes aging. We include aging simply because the horse’s metabolism will naturally start to slow down as they get older, so then it becomes even easier to develop metabolic diseases.

Even though people sometimes think EMS and PPID are similar, they are actually very different conditions. PPID or also called Equine Cushing’s disease, is actually a condition associated with abnormal growth (hyperplasia) and tumor formation of the pituitary gland. This organ is an important producer and regulator of different hormones, so a tumor or enlarged pituitary in case of PPID will cause an overproduction of hormones such as ACTH. Because hormones are essential signaling molecules that regulate a variety of processes in different tissues, overproduction of hormones can have pretty significant effects throughout the body.

What are the similarities between the PPID and EMS?

PPID and EMS can often be confused because certain symptoms are similar, or can be. PPID horses can in fact also be ID but not always (only ~32-40% of cases with PPID have IR). But, that said, the diseases do have similarities

So in certain ways these diseases do show similar symptoms, however, the cause and pathology is very different.

Because treatment of these two metabolic diseases is different it is important to make sure a proper diagnosis is made by the veterinarian. EMS is typically diagnosed by physical examination, assessment of BSC and collection of a blood sample to look at insulin levels to assess whether the horse might be ID. PPID on the other hand is typically diagnosed based on the physical symptoms (e.g. long haircoat, excessive sweating, lethargy, muscle wasting, etc.) and also by analysis of the blood hormone levels of ACTH, which will indicate whether or not there might be an issue with the pituitary gland.

It is essential to distinguish between EMS and PPID to make sure you are treating your metabolic horse in the best way possible.

By Kelsey Sullivan|September 16th, 2019|Metabolic|Comments Off on Feeding the Insulin Dysregulated Horse