Help! My horse is allergic to Barley! … Or is he?

Help! My horse is allergic to Barley! … Or is he? 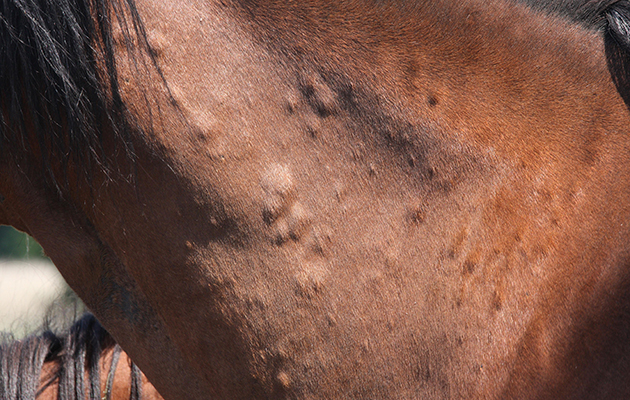 “Food allergy” and “food intolerance” are often used interchangeably in reference to the same symptoms. However, there are clear and distinct differences between the two. With a food allergy, there is an abnormal immune response that occurs after the inclusion of certain foods. This reaction is not dependent on the dose. A hint of hazelnut may be sufficient to induce severe symptoms in allergic individuals. In this example, hazelnut is the allergen, i.e., the feed material takes place at which an allergic reaction.

A food intolerance, on the other hand, is dependent on the dose and is not necessarily an immune response. A common example is lactose intolerance in humans. A little milk added into a sauce for example, may be no problem, but a daily glass of milk may cause problems.

For the course of the following, however, the focus is on food.

In humans, we have learned a lot about the phenomenon of food and the most common allergens. The major allergens in humans are: milk, eggs, fish, shellfish, tree nuts, peanuts, wheat and soybeans (Burney et al, 2010). Even in dogs and cats, the main allergic responses are seen with beef, milk, wheat, egg and chicken (Verlinden et al, 2006).

While the allergic reaction to food may be the same in humans, dogs and cats, in horses the reactions can be expressed through gastro-intestinal or skin reactions.

At the moment, not much known yet about the prevention of food allergies and the most important allergens in horses. Feed components could potentially play a role in the pathogenesis of inflammatory bowel disease (IBD), a chronic inflammatory bowel disease similar to Crohn’s disease in humans. However, until now there have been no cases in the literature where a clear diagnosis could be made. A single case was described in which an allergy to gluten (protein in grains) has been suspected, however, there was no clear diagnosis.

Finally, the phenomenon of oats bumps is described. Oats bumps show themselves as hives (urticaria), any small or large bumps that can occur anywhere on the surface of the skin. As the name suggests, these are associated with a reaction to oats, but it’s not always possible to elicit a reaction in horses during a stressful situation. This makes it difficult to test for it and to explain how or why it happens and exactly what triggers it. More information is needed to get a clear picture of the problem.

So, all that said, at the moment there is still very little known about the phenomenon of food allergies in horses. A confirmed case still has yet to appear in the literature.

A possible explanation is that the diagnosis is quite complex. In dogs, cats and horses, the gold standard is setting an elimination diet followed by a provocation test.

Elimination diet: An elimination diet is a short-term eating plan that eliminates all foods for the horse that may be causing allergies and other digestive reactions, and feeding only hay.

Provocation test: A provocation test is a form of medical trial whereby participants are exposed to a single substance or “thing” that is claimed to provoke a response, or to a sham substance or device that should provoke no response.

In horses, feeding an elimination diet means starting from feeding a ration of only hay for at least two weeks or until the horse shows no symptoms. During the provocation test, single ingredients are added one by one to gauge the reaction of the horse to those specific ingredients. To then arrive at an effective diagnosis, it is necessary to perform a challenge test.

It is always possible that symptoms disappear by chance. In a challenge test with horses, the old ration is reintroduced. If the symptoms return, the diagnosis of food allergy can be confirmed. But we do not know how the horse responds; which must then be determined by adding the ingredients one by one, to determine the horse’s response to specific ingredients.

This diagnostic method requires quite a bit of time, horse owners were looking for faster alternatives. There are commercial tests on the market which will test the blood for antibodies to specific allergens. These tests are already available for humans, dogs and cats. In horses, these tests are also available, however, there is no scientific validation of the reliability of the results.

The aim of this study was to evaluate a commercially available food-allergy test for horses and ponies. The study was divided into two phases.

Phase I: blood samples were taken from the same animal at two different points in time in order to evaluate the consistency of the results of the test.

Phase II: a challenge test was carried out with the ponies that were found positive in phase 1, at one or a plurality of feed-allergens.

After approval by the ethics committee,17 healthy Shetland ponies selected. The group was housed in a covered paddock. Their ration consisted of hay and was balanced with a vitamin-mineral supplement. After adaptive period of 14 days, Phase I of the trial started on day -14 to day 0. Phase II then started on day one.

At day -14 and day 0, blood was taken from each pony (so two different times with 2 weeks between). This sample was sent to a commercial laboratory to be tested for antibodies to commonly used feed materials in horses. First, a general screening was conducted in which a result could be positive or negative. Positive results were tested more extensively for specific allergens.

On day 0, the first provocation test was carried out with the feed materials in which the ponies in phase I positively to tests. Each pony was given 100 g of the allergen for 14 days, 2 times a day, on top of the basic ration of hay and a vitamin-mineral supplement. The ponies were individually fed before, after which they were placed back in the group. Sugar beet was tested in the form of beet pulp. The ponies that tested positive in multiple allergens, were consecutively tested with each of the feed materials, having in each case 1 week rest period between repetitions.

The results of phase I showed that the result of the blood test on day -14, 6 out of the 17 ponies were positive in the first blood sample. In the second blood test two weeks later, 7 of the 17 ponies were positive. However, for these two blood samples within the same pony, these ponies did not test positive on both test. For the specific allergens, we see different results in each pony. Only 3 out of the 10 ponies positive tested positive twice. Of those, only one tested positive twice for the same allergen. This was pony 13 who tested positive for twice for an allergy to rye.

Based on this data, the commercial test results are inconsistent and therefore not reliable.

Each pony’s commercial lab test results varied when tested twice (with two weeks between tests). Even after the provocation, to test the specific allergens, no pony showed any reaction to the ingredients. If the pony truly had an allergy to the ingredient, they would have shown a reaction when that ingredient is consumed. Since a food allergy case in horses has still not been described in the literature, researchers do not know what symptoms to expect. For that reason, the ponies were monitored closely for both reactions of the gastrointestinal tract, skin and respiratory system. We monitored the symptoms that are known in other species, including dogs and cats. Researchers even looked for signs of anaphylactic shock as a precaution.

Based on the results, we can conclude that the commercial test that searched for antibodies in the blood is not reliable.

If the results of this test are misinterpreted to be accurate, this can lead to misdiagnosis. The effects of such a misdiagnosis can range from reduced performance to severe health problems.

What is even more dangerous, is the elimination of grasses, such as pasture, hay and pre-drying, out of the feed ration. This lack of fiber and structural causes, can lead to colic, diarrhea, weight loss, laminitis, dental and behavioral problems.

Currently, there are few described cases of horses with a possible food allergy. As such, it is unlikely that this is the case with your horse, especially if no symptoms are present. Horse owners and veterinarians cannot rely on the results of a commercial blood test to diagnose allergies. The only way to be sure, is the use of the gold standard, namely elimination and provocation. Without proper diagnosis, horse owners and their vets cannot safely treat symptoms.

By Kelsey Sullivan|April 24th, 2019|Blog, Research|Comments Off on Help! My horse is allergic to Barley! … Or is he?