The Glycemic Index of Cavalor® Feeds

There has been a considerable debate in the equine community regarding starch and sugar levels in horse feeds. Like fiber and fat, starch and sugars are energy sources that “fuel” your horse. Higher levels of starch and sugars can be indicated for performance or breeding horses, but for some other horses, such levels may not be appropriate. Moreover, various studies have indicated that a high starch & sugar intake has been associated with various disorders in horses such as colic, laminitis, and insulin resistance. The glycemic index is a tool for quantifying the impact of a feed on the glucose response of horses. Cavalor® undertook a study to determine the glycemic index of select Cavalor® feeds and their impact on insulin response.. This study was executed in cooperation with Department of Animal and Food Sciences at the University of Kentucky. This article addresses main results of this study and how this information may help horse owners to select an appropriate feed for their horse.

Feedstuffs may contain simple sugar and starch. Starch is also digested to simple sugars like glucose. These sugars are usually absorbed in the small intestine. Consequently, the concentration of glucose in the blood will rise after intake of a feed containing starch and sugars.

Insulin is a hormone involved in regulating carbohydrate and fat metabolism in the body. The blood insulin concentration is often measured when the GI is determined. Insulin is a hormone that causes cells in the skeletal muscles and fat tissue to absorb glucose from the blood. However, there are various disease conditions where the response of insulin towards glucose levels in the blood may be compromised, e.g. if your horse is insulin resistant (IR). Horses and ponies that are IR or suffer from a disorder that involves IR may benefit from a low-glycemic diet.

Cavalor® Strucomix Original and, more recently, Cavalor® FiberForce were developed to provide a dietary solution for horses in need of a moderate or low GI feed respectively. Cavalor® FiberForce has been especially designed for horses in need of a low GI feed. In addition, this feed could also be used for horses suffering from complex problems such as a combination of IR and a compromised forage intake, motility problems, or laminitis. However, horses with a compromised forage intake still need to take in sufficient fiber. Cavalor® FiberForce contains not only a low sugar & starch content, but also a fiber level comparable to hay. Therefore, the GI and insulin response of Cavalor®’s moderate to low GI feeds were also compared with hay in this study. Both hay and oats were included as reference feeds in this study.

Feeds like Cavalor® Perfomix and Cavalor® Superforce have been designed to provide energy for types of exercise in which “carbohydrate sources” supply a large percentage of the energy required to the horse. These high-GI feeds were selected for this study as they differ in composition. In practice, these feeds are typically used for performance horses. In table 1, the non-structural carbohydrate content (NSC) of the select Cavalor® feeds used in this study are presented.

How do these results help you to better feed your horse?

A low or high-GI feed cannot be simply classified as “good” or “bad” for your horse. If your horse is kept individually, it is preferable to select the feed that best matches your horse’s needs. The type, level and the amount of work, along with the character, breed, condition, and health status of your horse determines what ration and Cavalor® feed would be best to meet your horse’s needs. This is particularly true regarding the amount and type of energy source you have to feed your horse. The Cavalor® team has various experts who can further help you selecting the right feed for your horse.

Horses performing in equestrian disciplines involving significant amounts of short-term, high-intensity exercise (racing, jumping, barrel racing and cutting) may benefit from feeds that provide highly digestible carbohydrates to help “fuel” their muscles. The GI and insulin response of a feed may be important for trainers or riders to determine the best feeding time for their horses before or after a race and/or competition. Cavalor® Perfomix can be fed when a feed with a stronger insulin peak is desired. Cavalor® Superforce can be used for performance horses that need a high energy feed with a less pronounced glucose and insulin peak.

Fig. 1: Glycemic Index (blood glucose response relative to oats).The total amount of blood glucose increase when feeding 1 kg DM of test feed / 500 kg horse. Bars with values greater than 100 indicate that a higher blood glucose level than that produced when feeding a comparable amount of oats, which is set at 100. Cavalor® FiberForce showed the lowest GI and while Cavalor® Perfomix had the highest. 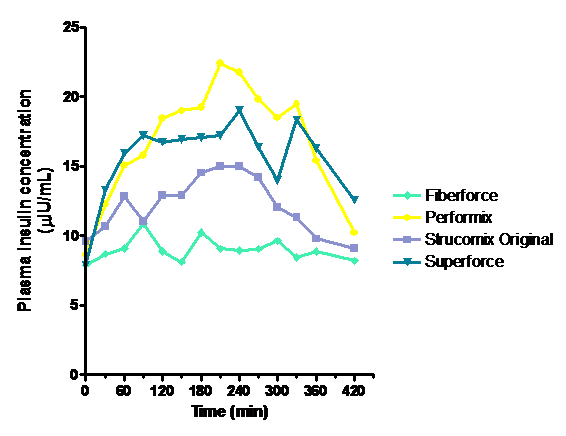 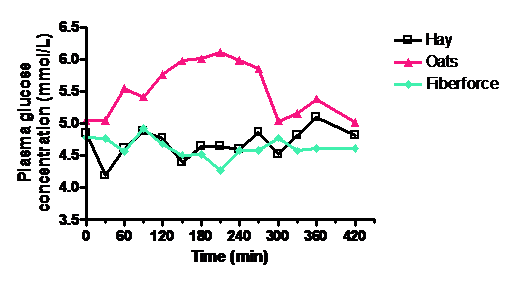 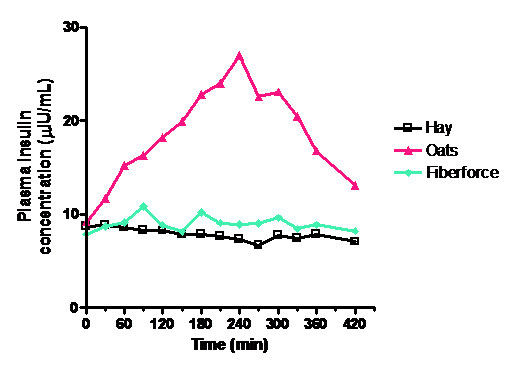 Fig 3b: Plasma insulin concentrations over time of hay, oats, and Cavalor® FiberForce. The graph shows that Cavalor®FiberForce has a similar insulin response as hay and is a safe supplementary feed for IR horses.

* NSC value of the hay that was used in this study and not reflective of the NSCs of all hays. In practice the NSC levels may vary considerably between different hay types and cuts. Horse owners should analyze their hay if their horse is sensitive to a high NSC content.

Q: Is the GI simply a reflection of the amount of starch and sugars in the diet?

A: The level of starch and sugar intake is one of the most important determinants for the GI of a feed. However, the blood glucose and insulin response to a feed is dependent on the rate of digestion and absorption of that feed. The rate of digestion can be influenced by several factors, such as the type of starch, processing technique, and interactions with other nutrients in the diet. Variations within a processing technique, such as the flake thickness of flaked cereals, may also result in different glucose and insulin responses.

Q: What Are Puffed Grains?

A: Cavalor® uses puffed grains in various feeds for performance horses. The horse is able to digest this type of starch very well. If you provide energy in the form of starch to performance horses, high digestibility is preferred to prevent gastrointestinal problems. 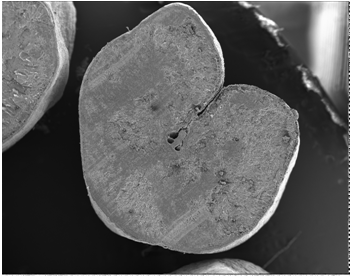 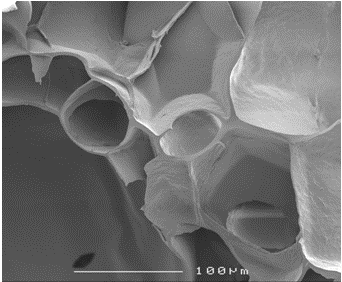 Q: Can Cavalor® FiberForce be used as a complete feed?

A: Cavalor FiberForce is a unique feed in both texture and nutrient composition. Although is it not advised for healthy horses, this feed could also be used as a complete feed when forage intake is not recommended by your vet or nutritionist due to a specific health condition. For example, Cavalor® FiberForce may offer a dietary solution for aged horses that are insulin resistant or suffer from laminitis along with dental problems. These horses are unable to fully ingest their forage, but still need fiber to keep their gut happy. Similarly, such solutions may also be indicated for horses with an impaired intake but also suffer from laminitis or a muscle problem.

By Dean|February 5th, 2015|News, Study|Comments Off on The Glycemic Index of Cavalor® Feeds